What is the difference between the ASO Score and the App Power? 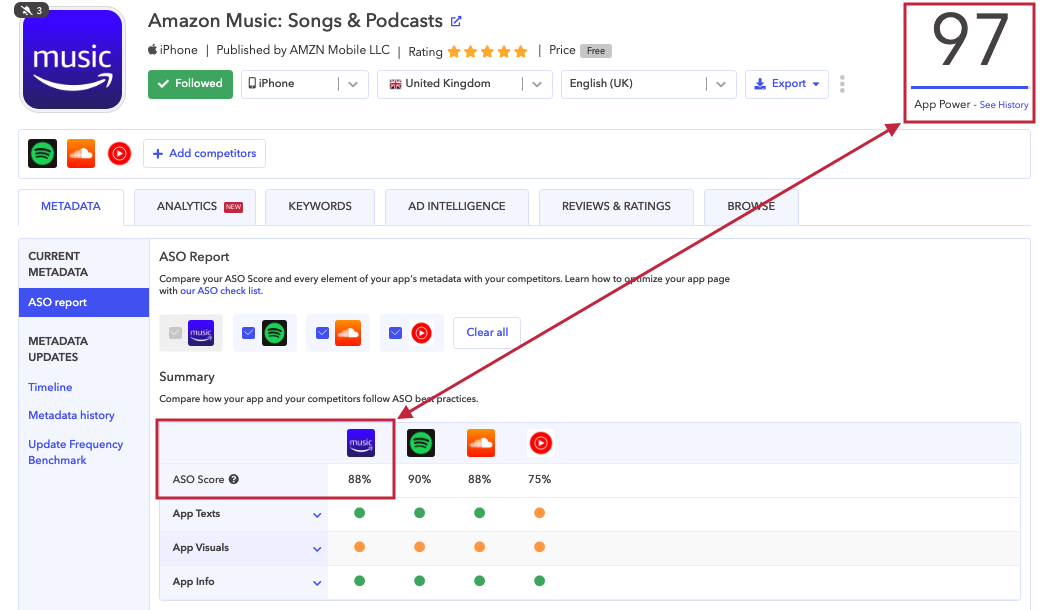 The App Power is a score that calculates the overall visibility or weight of your app in the Store. It is a dynamic score that is directly influenced by the downloads an app drives or its category rankings. You can find more info on the App Power and interesting examples as to how it can be used right here.

The ASO Score is calculated based on the extent to which your app metadata follows the ASO best practices.

In the Metadata section, we give you an appreciation of each element of your app (Title, Subtitle, etc.) that goes from red, yellow to green. Green means you are following the best ASO practices. For example, you are using all available characters in the subtitle field, or you have uploaded an app preview, etc.

AppTweak then calculates the overall ASO score of your app and gives you a final grade which is the ASO score.

Essentially, the ASO Score provides more insights into the unused capacity of your metadata elements. Of course, you will not be penalized for not using all of the available characters in the Title, Subtitle, etc. However, you should take advantage of using the maximum number of characters Apple and Google provide.

👉 Learn more about our ASO Score

To improve your ASO Score, you can check the elements that aren't in green in the ASO Report and see how to improve them, it's like a checklist. Improving the App Power is much more complex since it means improving the overall quality of your app (driving more downloads, increasing conversion, getting better reviews, etc.)

It is also important to keep in mind that an app can have an ASO score of 90% and still have a low App Power. This is typical for smaller or new apps that follow all the ASO best practices but don't have a lot of traffic in their app yet. An app can also have an App Power at 100% and a very low ASO score, this is typical for highly popular apps that don't really need ASO to be found on the store (such as Snapchat).