Which apps are Apple and Google associating with your app? Do your competitors have the same suggested apps? Which apps appear in the suggestions of both your app and your competitors? You will receive the answers to all of these questions in the Similar Apps section of the Browse/Explore Tab.

What are Similar Apps?

When you look at an app’s profile page on the Apple App Store and Google Play Store, you’ll find that both stores suggest a series of related apps at the end of the page. The suggested apps are often apps that could also appeal to the user that has landed on your app’s profile page.

On the App Store, Apple suggests a list of up to 15 apps the user “You May Also Like”. On the Play Store, Google gives a series of suggestions, most of which depend on the user’s profile. In the Similar Apps section, Google lists up to 200 apps that are similar to the viewed app.

⚠️ On Google Play, this is called "Similar Apps". On the Apple Store, this section is called "You May Also Like".

Similar Apps (from your app)

Essentially, these are all of the apps that appear on your app's main landing page. You can better understand how close you are to competitors, and which apps are consistently appearing in the suggestions.

💡 You can scroll horizontally to view all of the apps in this section.

Based on the app we have chosen, you can view all of the similar apps that will pop up on the respective app's landing page in the Similar Apps (Google) or You May Also Like (Apple) sections.

Next to each of these competitors' app icons, there is a number on the top left corner. The number indicates the ranking position that the competitor appears on this section of your app's landing page.

You can also toggle the button and click on your competitors' app icons to view their Similar Apps.

To give you more insights into the apps that appear in this section, we show you the Average App Power of all of these competitors' apps.

The App Power is AppTweak's very own authority score that shows the overall performance of an app in the store. The App Power is built on a scale from 0-100, 100 being the highest score and 0 the lowest. A high App Power means that an app is performing well in the given country and that it probably has a high download rate.

👉 Read more about what the App Power is on AppTweak

You can click on the 'Show History' button to take a look at the past history of all of these competitors that appear on your app's landing page. 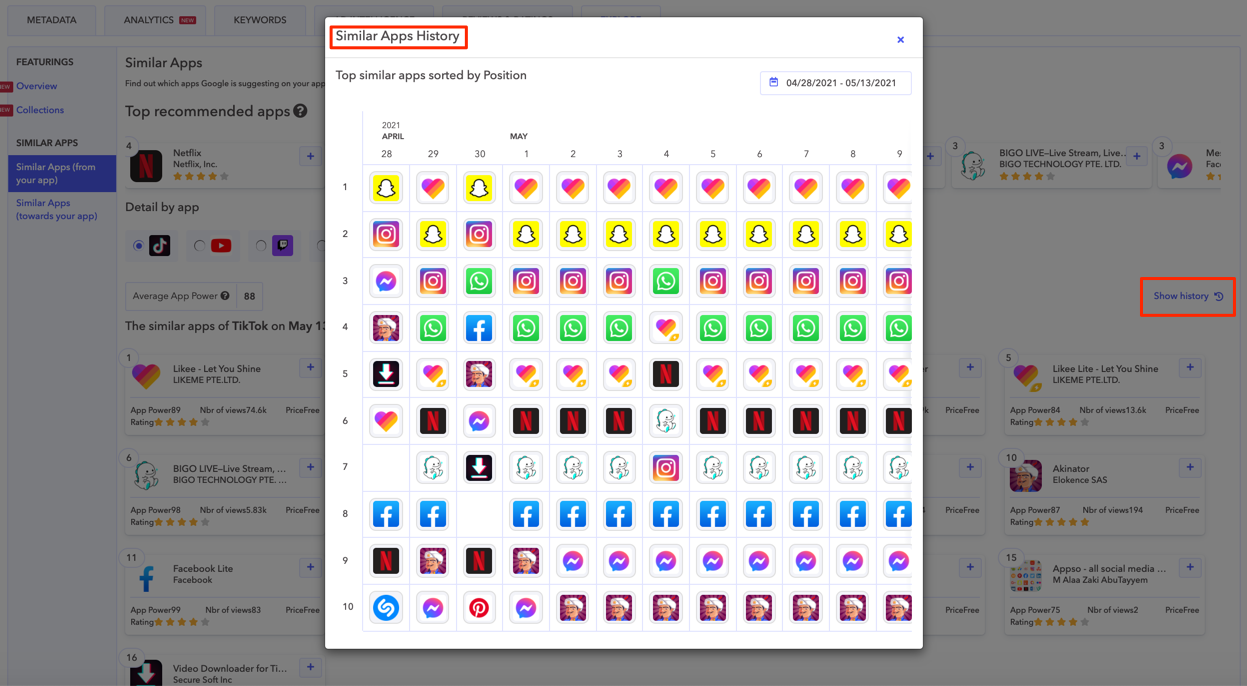 This feature can also help discover new competitors, either existing apps you hadn’t thought of or newcomers that are gaining in popularity.

It’s important to note that the suggestions vary from one country to another, so you can use the feature to identify the most appropriate competitors across countries. Some apps can perform better in a specific market and be more threatening to your app in that area

Similar Apps (towards your app)

In addition to seeing which app Apple or Google show on your app’s App Profile, you can now also see the apps that point towards your app.

You can check which apps your app is associated with (this can also be a great source of inspiration to find potential competitors), in which position your app appears among an app’s Similar App section (the higher your app’s position, the more visibility it gets through that app’s page) and the total number of apps that point towards your app (again, the more apps that point towards your app, the higher the potential of it being discovered through other apps).

Knowing the apps that point towards your app can give you an idea of the visibility Apple and Google are giving to it in the Similar Apps / You May Also Like sections. 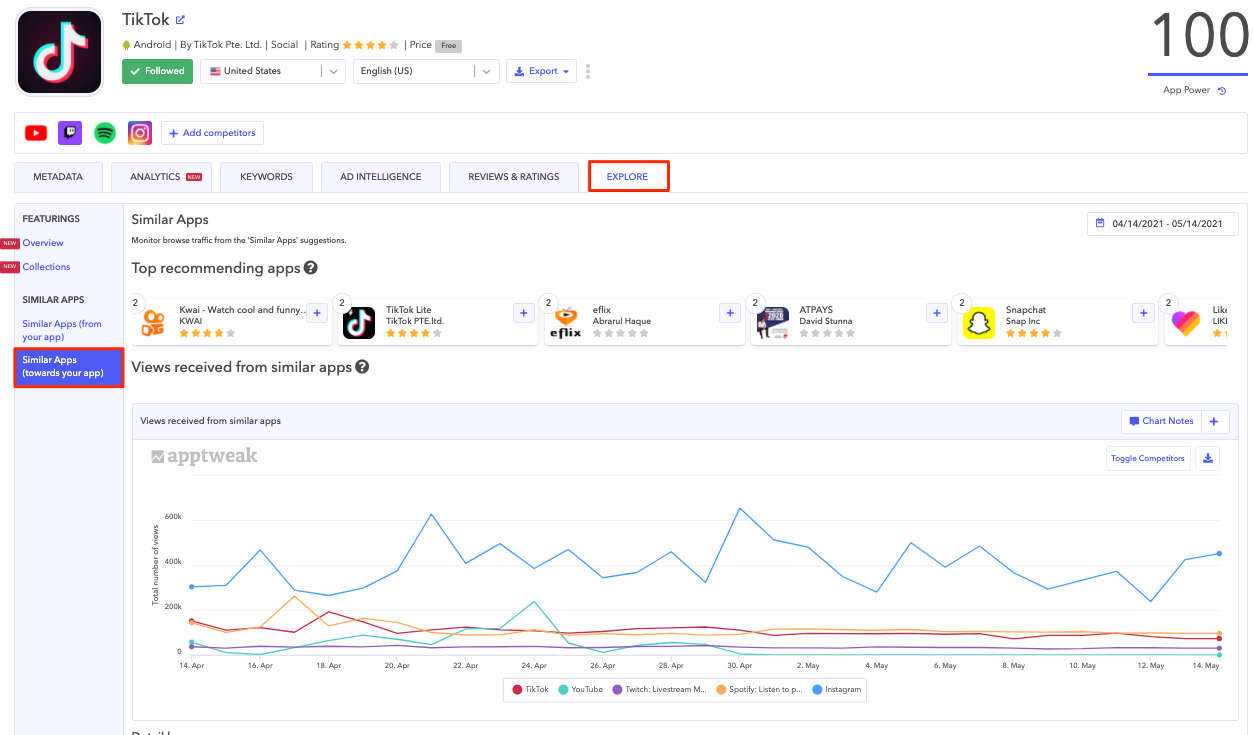 Just like the Similar Apps (from your app) AppTweak identifies the top-recommended apps which are the recommended apps that are most repeated between you and your competitors.

You can use AppTweak to get an idea of which apps point towards your app on both the App Store and Play Store, along with the number of estimated views your app receives from these apps.

💡Add notes to this graph to keep track of when important events took place which may have resulted in an increase in views from similar apps. 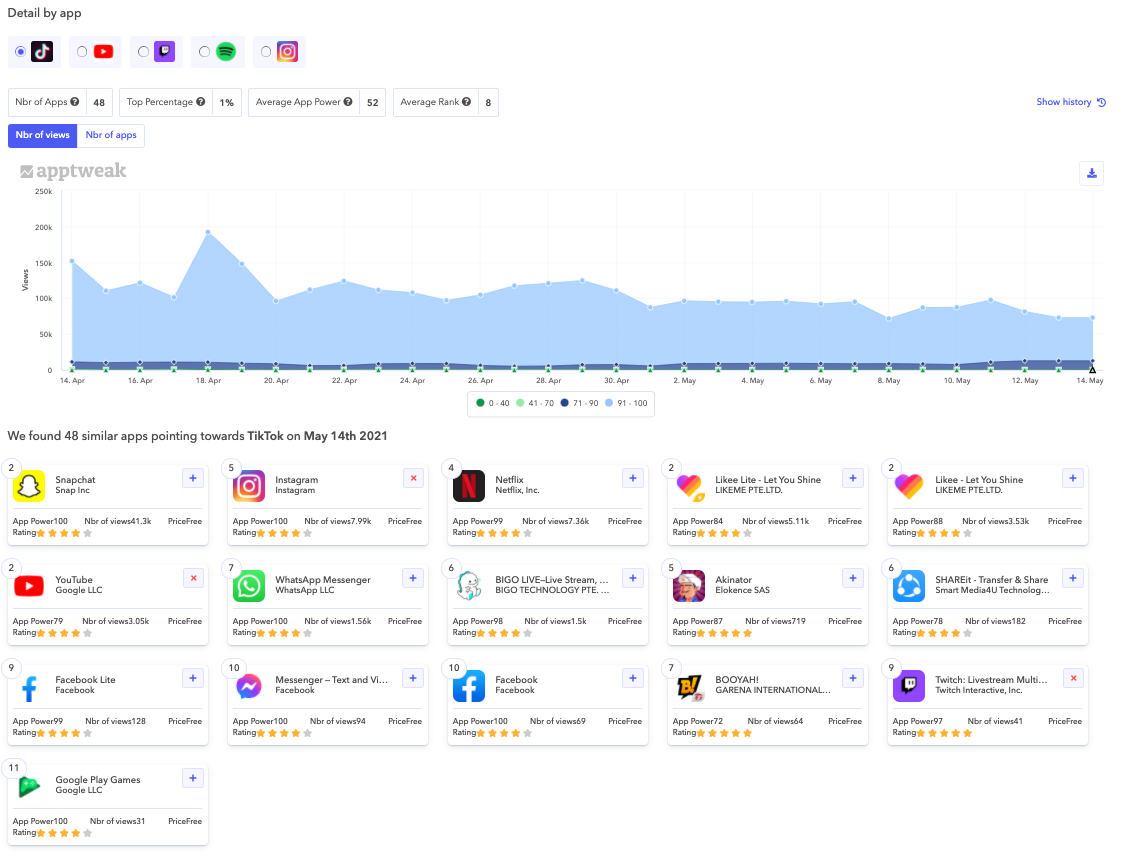 You can filter this section by taking a look at your main app or competitors we have added and also toggle the "Nbr of views" or "Nbr of apps" to take a look at the evolution of the Number of views and Number of apps over time given the specific date range.

Some KPIs that we also include in this section are:

You can click on the 'Show History' button to take a look at the past history of all of these competitors that appear on your app's landing page.

In this example, we're taking a specific look at our main app, TikTok (United States, Google Play Store), and where the similar apps point towards TikTok. We can quickly identify that if we were to go to on Snapchat's Similar Apps section, TikTok would rank #2.