If you’re familiar with ASO, you know how difficult it can be to fully measure the impact of your ASO efforts. When you release a new version of your app on the App or Play Store, you want to closely monitor how the changes you’ve submitted have impacted your keyword rankings.

On AppTweak, you can now easily identify when the Apple or Google algorithm has picked up your keyword updates.

Go to the Keyword tab and click on "All Ranked Keywords". We’re reviewing millions of keywords to show you the app’s visibility progression across all keywords in our database. This can take a few seconds but it’s worth the wait!

⚡️ This is a premium feature for Power plans and above.

You will be directed to the Performance Report where AppTweak fetches all your ranked keywords and generates the report for you.

👉 Learn more about our All Ranked Keywords Performance Report!

Go to the "Smart Movements" section in the left-hand side menu. The first graph you will see is the "Keyword Movement Detector", which you can generate for each app (switch between apps using the buttons).

This graph indicates the dates at which we detected unusual keyword ranking movements for the selected app among all keywords followed by AppTweak.

🚨 We fetch all keywords tracked by AppTweak, even those that are not being tracked in your account. You, therefore, have access to ranking movements related to many more keywords than your subscription gives you access to.

These movements can either be negative or positive: a peak on the graph doesn’t necessarily represent a progression in keywords ranking, it just indicates the number of keywords for which we detected anomalies at a certain date.

The Top Keyword Movements show you the terms that are most repeated across all keyword movements at a certain date. By default, the selected date is the one with the highest number of keyword ranking movements for the selected period of time.

The top added and top removed terms are the most repeated terms across the keywords that had the highest positive or negative movements. On the right side of each term, we also show you the number of keywords the term is contained in. You can switch to single-word terms or 2-3 words terms. 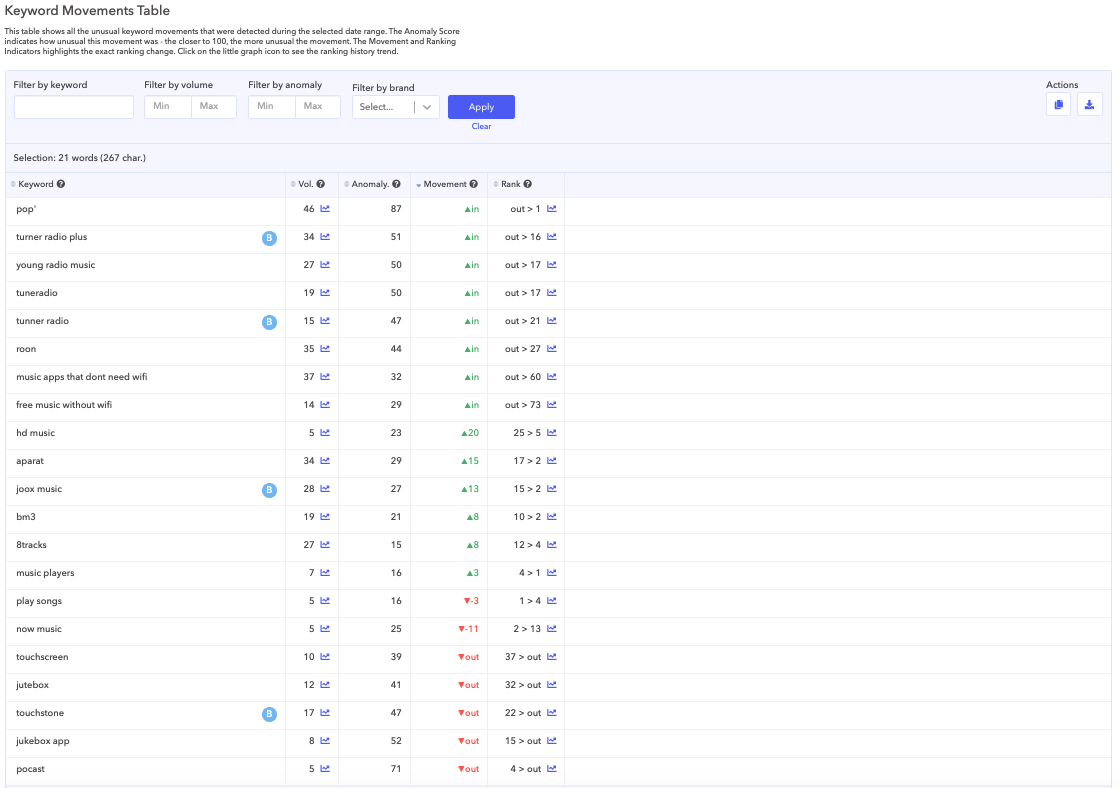 For each keyword, you can see if the movement was negative or positive ("Movement" column) and the ranking progression.

🔼 The "in" green arrow means that your app was not ranking on this keyword but now it is.

🔽 The "out" red arrow means that your app was ranking on this keyword but now it isn't.

This section is extremely helpful to see when your app had major keyword ranking movements. You can easily identify which keywords were most impacted by your latest keyword update, and you can even detect when competitors changed their metadata and try to guess the changes they made (e.g in the case of the keyword field).